George Iain Duncan Smith is Member of Parliament for Chingford and Woodford Green. The Secretary of State for Work and Pensions from 2010 to 2016, he was previously the Leader of the Conservative Party and Leader of the Opposition from 2001 to 2003. He was first elected to Parliament at the 1992 general election as the MP for Chingford—which he represented until the constituency's abolition in 1997—and he has since represented its successor constituency of Chingford and Woodford Green. Duncan Smith was born in Edinburgh and served in the Scots Guards from 1975 to 1981, seeing tours in Northern Ireland and Rhodesia. He joined the Conservative Party in 1981, and eventually succeeded William Hague as Conservative Leader in 2001. Duncan Smith was the first Catholic to serve as a Conservative Leader. 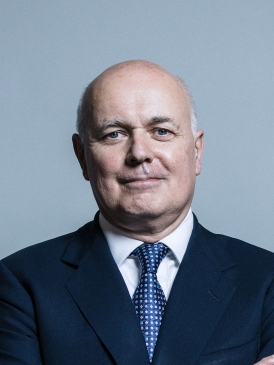