Bestway Group Chief Executive Officer (CEO) Zameer Choudrey, Chairman Conservative Friends of Pakistan, was awarded the Sitara-e-Imitiaz (Star of Excellence), conferred on him by the President of Pakistan, on March 23, in recognition of his contributions to Pakistan through his services and the wide array of his philanthropic work. The ceremony was held at the President House on Pakistan Day. 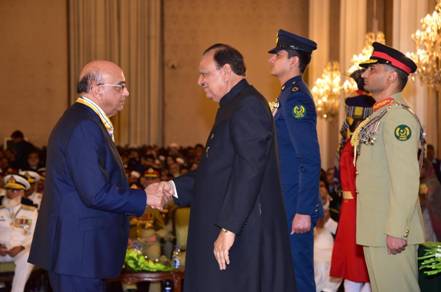 Sitara-e-Imtiaz is one of Pakistan’s highest civilian honours for public service. Elated by the accolade, Choudrey said, “I am gratified to have been honoured by the state and to receive this recognition by the president.”

Choudrey is a fellow of the Institute of Chartered Accountants in England & Wales. He is an honorary Doctor of Civil Law from the University of Kent. Choudrey was appointed Commander of the British Empire (CBE) by United Kingdom’s (UK) Queen Elizabeth II in 2016 for his services to the wholesale industry and his philanthropy.

Bestway is UK’s eighth largest private company with diverse global interests that generate a turnover of $5 billion per annum with profit before tax of $630 million per annum. The group employs 34,000 people globally, out of which a workforce of 22,000 is employed in Pakistan and contributes more than $425 million annually to Pakistan’s national exchequer.

The philanthropic arm of the group, Bestway Foundation, was established in1987 in UK and later in 1997 in Pakistan. Certified from the Pakistan Centre for Philanthropy, Bestway Foundation supports many national charities, educational institutions, societies and trusts in Pakistan and abroad, in addition to supporting many natural disaster rehabilitation and relief efforts and providing free medical facilities to more than 35,000 patients in the local communities annually, while valiantly protecting and creating a healthier environment for all.

Bestway employs hundreds of trainee engineers, management trainees and apprentices every year, who undergo intensive training in their respective fields. Since 1998, Bestway Cement had trained over 2,500 apprentices in order to enhance the skills of the local community.

To date, Bestway Group had contributed nearly $34 million to fund the charitable activities of national and international societies and the projects of communal uplift in the countries in which it operates.

Choudrey said, “We believe in serving the communities by providing training opportunities to the youth while creating employment opportunities for people and through supporting charitable causes for the welfare of deserving people. We want to empower the needy through education, training and self-reliance.”