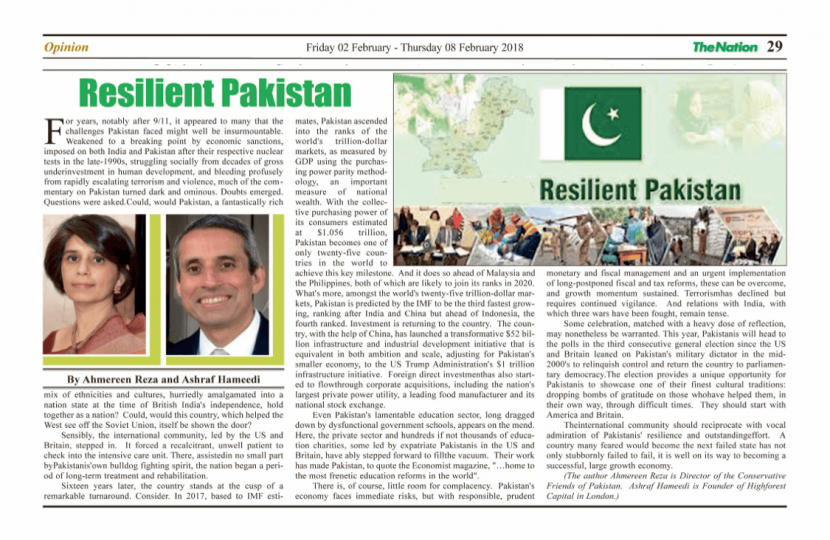 For years, notably after 9/11, it appeared to many that the challenges Pakistan faced might well be insurmountable.   Weakened to a breaking point by economic sanctions, imposed on both India and Pakistan after their respective nuclear tests in the late-1990s, struggling socially from decades of gross underinvestment in human development, and bleeding profusely from rapidly escalating terrorism and violence, much of the commentary on Pakistan turned dark and ominous.  Doubts emerged. Questions were asked.  Could, would Pakistan, a fantastically rich mix of ethnicities and cultures, hurriedly amalgamated into a nation state at the time of British India’s independence, hold together as a nation?  Could, would this country, which helped the West see off the Soviet Union, itself be shown the door?

Sensibly, the international community, led by the US and Britain, stepped in.  It forced a recalcitrant, unwell patient to check into the intensive care unit.  There, assisted in no small part by Pakistanis’ own bulldog fighting spirit, the nation began a period of long-term treatment and rehabilitation.

Sixteen years later, the country stands at the cusp of a remarkable turnaround. Consider.

In 2017, based to IMF estimates, Pakistan ascended into the ranks of the world’s trillion-dollar markets, as measured by GDP using the purchasing power parity methodology, an important measure of national wealth.  With the collective purchasing power of its consumers estimated at $1.056 trillion, Pakistan becomes one of only twenty-five countries in the world to achieve this key milestone.  And it does so ahead of Malaysia and the Philippines, both of which are likely to join its ranks in 2020.  What’s more, amongst the world’s twenty-five trillion-dollar markets, Pakistan is predicted by the IMF to be the third fastest growing, ranking after India and China but ahead of Indonesia, the fourth ranked.

Investment is returning to the country.  The country, with the help of China, has launched a transformative $52 billion infrastructure and industrial development initiative that is equivalent in both ambition and scale, adjusting for Pakistan’s smaller economy, to the US Trump Administration’s $1 trillion infrastructure initiative.  Foreign direct investment has also started to flow through corporate acquisitions, including the nation’s largest private power utility, a leading food manufacturer and its national stock exchange.

Even Pakistan’s lamentable education sector, long dragged down by dysfunctional government schools, appears on the mend.  Here, the private sector and hundreds if not thousands of education charities, some led by expatriate Pakistanis in the US and Britain, have ably stepped forward to fill the vacuum.  Their work has made Pakistan, to quote the Economist magazine, “…home to the most frenetic education reforms in the world”.

There is, of course, little room for complacency.  Pakistan’s economy faces immediate risks, but with responsible, prudent monetary and fiscal management and an urgent implementation of long-postponed fiscal and tax reforms, these can be overcome, and growth momentum sustained.  Terrorism has declined but requires continued vigilance.  And relations with India, with which three wars have been fought, remain tense.

Some celebration, matched with a heavy dose of reflection, may nonetheless be warranted. This year, Pakistanis will head to the polls in the third consecutive general election since the US and Britain leaned on Pakistan’s military dictator in the mid-2000’s to relinquish control and return the country to parliamentary democracy.  The election provides a unique opportunity for Pakistanis to showcase one of their finest cultural traditions: dropping bombs of gratitude on those who have helped them, in their own way, through difficult times.  They should start with America and Britain.

The international community should reciprocate with vocal admiration of Pakistanis’ resilience and outstanding effort.   A country many feared would become the next failed state has not only stubbornly failed to fail, it is well on its way to becoming a successful, large growth economy.

Ahmereen Reza is Director of the Conservative Friends of Pakistan in London.  Ashraf Hameedi is Founder of Highforest Capital in London.