Reforming education in Khyber Pakhtunkhwa: Accomplishments, challenges and looking ahead 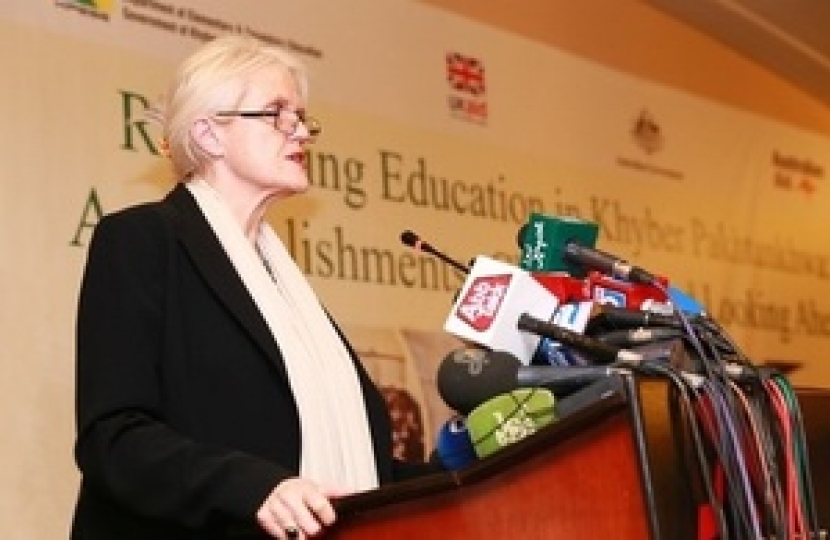 ''The UK is proud to be assisting the Government of Khyber Pakhtunkhwa'', Deputy Head of the UK’s Department for International Development (DFID), Judith Herbertson.

The Khyber Pakhtunkhwa (KP) government has set a high bar for other provinces by taking its upcoming fiscal year’s education budget to Rs139 billion from what it was a mere Rs61 billion four years ago.

“This reflects an increase of 128% since the time Pakistan Tehreek-e-Insaf (PTI) assumed government in 2013,” announced KP Chief Minister Mr. Pervez Khattak on Wednesday at Marriott Hotel in Islamabad.

He was presiding over an event, titled “Reforming Education in Khyber Pakhtunkhwa: Accomplishments, Challenges and Looking Ahead,” organized by the KP Elementary and Secondary Education Department (E&SED).

The Chief Minister said that successively increasing education budget is aligned to achieve the targets set in the KP Education Sector Plan 2015-20. The plan, he said, outlines systematic steps to implement Article 25A of the Constitution, which mandates the state to provide free and compulsory education to all children between the ages of five and 16.

We are firmly committed to providing the money required to finance the implementation of the Education Sector Plan,

KP Education Minister Atif Khan said that the province, in fact, is already spending the highest percentage of budget (23 per cent) on education among all provinces. For boosting girls’ enrolment and their retention in schools, said Mr. Khan, the KP government is providing stipends to all girls enrolled at secondary level (grade 6 to 10) across the province.

“Last year, a total of 443,320 female students benefitted from the girls’ stipend scheme which had an allocation of Rs1.36 billion,” he said, adding that 455,364 more girls will benefit from the scheme this year for which the provincial government had allocated Rs1.34 billion. Likewise, the government’s priority for girls’ education is evident from 1,400 girl-specific community schools. ”These schools, located in a community-donated room and managed by a local teacher, serve out-of-school girls with limited access to educational opportunities,” said the Education Minister.

Special Secretary for Education Qaisar Alam explained that the provincial government provides for free textbooks and costs of teaching and learning materials at the girls’ community schools. “Currently, more than 70,000 girls are benefitting from this initiative,” he said.

KP Education Secretary Dr Shahzad Khan Bangash said that it is their commitment that no child in public schools shall be deprived of basic facilities, including adequate classrooms, furniture, toilets, electricity and drinking water. “To honor this commitment, the provincial government has provided missing infrastructure in 20,000 schools so far,” he said. The improvement in learning environment, said the Education Secretary, had restored the confidence of parents and students in public-sector schools. “This is evident from the fact that more than 35,000 students have opted to shift from private to public sector schools,” said Dr Bangash.

The United Kingdom and Australian governments are investing Rs 5.5 billion to support these education reforms in the province.

While speaking at the event, Deputy Head of the UK’s Department for International Development (DFID), Judith Herbertson, said:

Education has the potential to unlock vast untapped reservoirs of talent, creativity, and entrepreneurial spirit in Pakistan; and to transform the lives of individuals, families, and communities in Pakistan.

The UK is proud to be assisting the Government of Khyber Pakhtunkhwa, alongside others, to provide a good quality education for all the children in the province, no matter what their background. The Government’s Education Sector Plan, along with the resolution to fund it, represents a serious long-term commitment to build an excellent education system for the future of all these children.

The Acting Australian High Commissioner, Jurek Juszczyk, said that Australia has been a long-time supporter and advocate for girls’ education and is making significant, high quality and transformational investments in girls’ education through the aid program in Pakistan.

Bernard François, Head of Cooperation at European Union to Pakistan, commended the KP government’s efforts in ensuring every child’s right to education through its initiatives focusing on out-of-school children and girls’ education. “The EU sees equity in education not only as a critical area for sustainable development, but also fundamental in maintaining stability,” said Mr. François. “We are glad that it is also one of the key priorities of the KP Education Sector Plan.