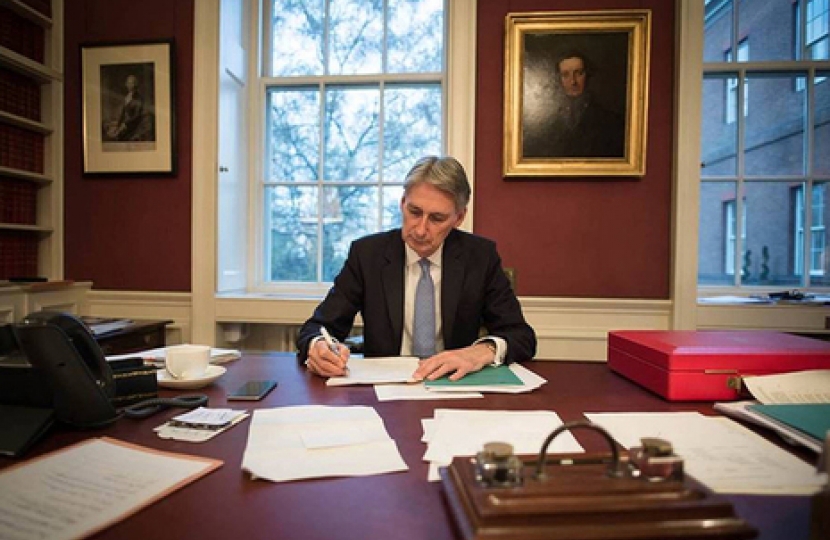 The Chancellor has presented his Autumn Statement to Parliament – here's a summary of what was announced.

Continuing to bring down the deficit

The UK economy is forecast to be the fastest growing major economy in 2016, but the Office for Budget Responsibility has forecast growth to slow and inflation to rise over the next two years.

But growth remains positive and employment continues to rise in each of the next 5 years, with half a million more people forecast to be in work by 2021.

The government has cut borrowing by nearly two-thirds since 2010, but will no longer aim for a budget surplus (where more tax is raised than is spent) by 2019.

New fiscal targets are needed to provide the flexibility to support the economy and create space for more investment in roads, rail, research, and housing.

The government has therefore set new fiscal targets which aim for 2% underlying deficit and debt falling by 2020, and a balanced budget as soon as possible thereafter.

Building an economy that works for all

3. Fuel duty will remain frozen for a seventh year

In 2017, fuel duty will remain frozen for the seventh successive year, saving drivers £130 a year on average.

To support savers, NS&I will offer a new three-year Investment Bond with an indicative rate of 2.2% from spring 2017. The bond will offer the flexibility to put away between £100 and £3,000 and be available to those aged 16 or over.

Once the Personal Allowance reaches £12,500, it will increase in line with inflation.

6. The National Living Wage and the National Minimum Wage will increase from April 2017

The National Living Wage for those aged 25 and over will increase from £7.20 per hour to £7.50 per hour. That means over £1,400 a year more for a full-time worker previously on the National Minimum Wage.

In Universal Credit, as a person’s income increases, their benefit payments are gradually reduced. The taper rate calculates the reduction in benefits as a person’s salary increases.

Currently, for every £1 earned after tax above an income threshold, a person receiving Universal Credit has their benefit award reduced by 65p and keeps 35p. They will now keep 37p for every £1, from April 2017.

Three million households will benefit from this change:

8. A ban on letting agents charging fees to renters

Letting agents will no longer be able to charge renters fees, for example when they sign a new tenancy agreement. This will stop tenants being hit with fees averaging £223 per tenancy.

The government will consult on this in due course.

9. Cracking down on pensions scams

A consultation before Christmas will look at ways to tackle pensions scams, including banning businesses from cold calling someone about their pension. This includes scammers targeting people who inadvertently ‘opt-in’ to receiving third party communications.

LIBOR fines are collected from banks who break banking rules, and are given directly to causes benefitting armed forces and emergency services charities.

£102 million will go to more than 100 projects supporting armed forces personnel, their families and veterans; emergency service personnel; children’s hospitals, air ambulances and emergency responders; and museums and memorials, over the next 4 years.

Investing in infrastructure and innovation to improve long-term productivity

11. A new National Productivity Investment Fund to provide £23 billion of additional spending, ensuring the UK’s economy is fit for the future

The fund will be used for projects such as roads and water connections that will support the construction of up to 100,000 new homes in the areas where they are needed most.

£390 million will go to future transport technology, including driverless cars, renewable fuels and energy efficient transport. This will include:

As part of the National Productivity Investment Fund, this will cover:

There will also be a two-year 100% first year allowance for companies who install electric charge-points, coming in from today‎. This allows companies to deduct the cost of the charge-point from their pre-tax profits in that year‎.

And £450 million will also be spent on trialling railway digital signalling technology which will expand capacity and improve reliability.

15. £1 billion to invest in full-fibre broadband and trialling 5G networks

Investment will support the private sector to roll out more full-fibre broadband by 2020-21. Funding will also support trials of 5G mobile communications.

And from April 2017, the government will also provide a new 100% business rates relief for new full-fibre infrastructure for a 5 year period.

A major increase in research and development funding for universities and businesses with R&D projects to help the UK remain an attractive place for businesses to invest in innovative research.

This will back scientific research and development of technologies such as robotics, artificial intelligence and industrial biotechnology.

Scotland, Wales and Northern Ireland will receive more money which can be spent on infrastructure projects, with each devolved administration deciding where this will be spent.

The new museums and galleries tax relief will be expanded to include permanent exhibitions.

The new tax relief, which starts in April 2017, was originally only intended to be available for temporary and touring exhibitions.

19. Over £10 million to support culture and heritage projects across the UK

£7.6 million will cover urgent and essential repairs to the heritage house, Wentworth Woodhouse in South Yorkshire.

Other cultural projects will also be supported, including:

21. £400 million through the British Business Bank to invest in growing innovative firms

The funds will be invested in innovative small businesses with potential for growth, to provide the finance that they need to expand. This will support up to £1 billion of new investment.

Rural rate relief will increase from 50 to 100% in April 2017, saving a business up to £2900 a year. This business rate relief is available to businesses in rural areas with a population under 3,000, where that business is:

A fair and sustainable tax system

23. Cracking down on tax avoiders and those who help them

A new penalty is being introduced for those helping someone else to use a tax avoidance scheme. Tax avoiders are hit with significant bills when HMRC defeats their avoidance scheme, this new penalty will ensure that those who help them will also face the consequences.

Also tax avoiders will not be able to claim as a defence against penalties that relying on non-independent tax advice is taking reasonable care.

From April 2017, most salary sacrifice schemes will be subject to the same tax as cash income.

In salary sacrifice schemes, employees exchange some of their salary for a non-cash benefit in kind (such as a mobile phone). Both the employer and employee make a tax saving, because the benefit is taxed less than a salary or not taxed at all.

This will affect types of salary sacrifice schemes differently:

Insurance Premium Tax (IPT) will increase from 10% to 12%. IPT is a tax on insurers and it is up to them whether and how to pass on costs to customers.