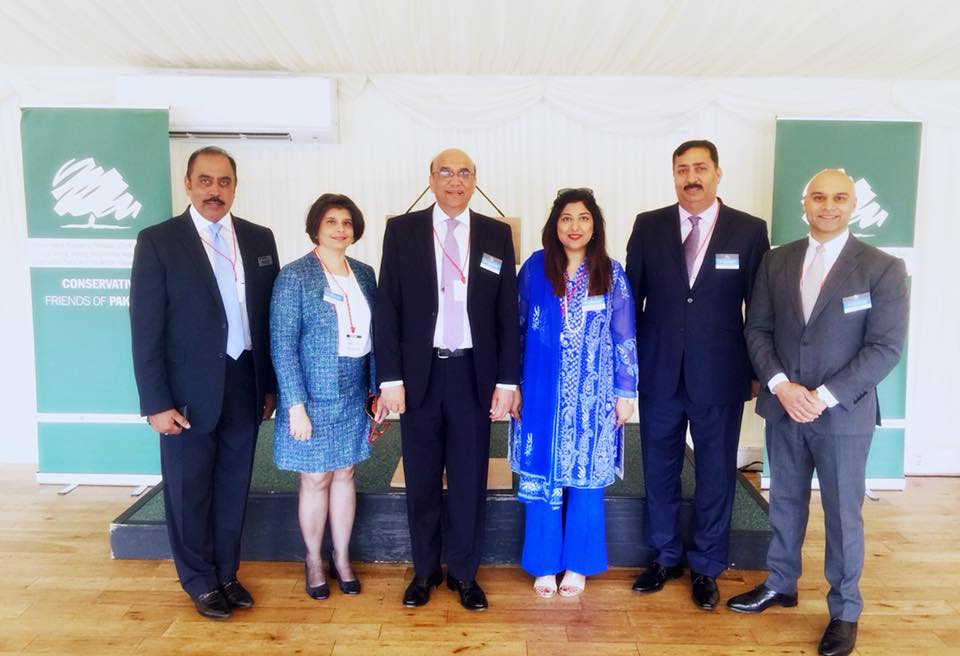 The Event kicked off with a Welcome Speech by Chairman Zameer Choudrey CBE who praised the charitable and entrepreneurial spirit of the Muslim community and the lessons from Ramadan. He encouraged British Pakistanis to join the Conservative Party and play their part in making Britain United and Great. 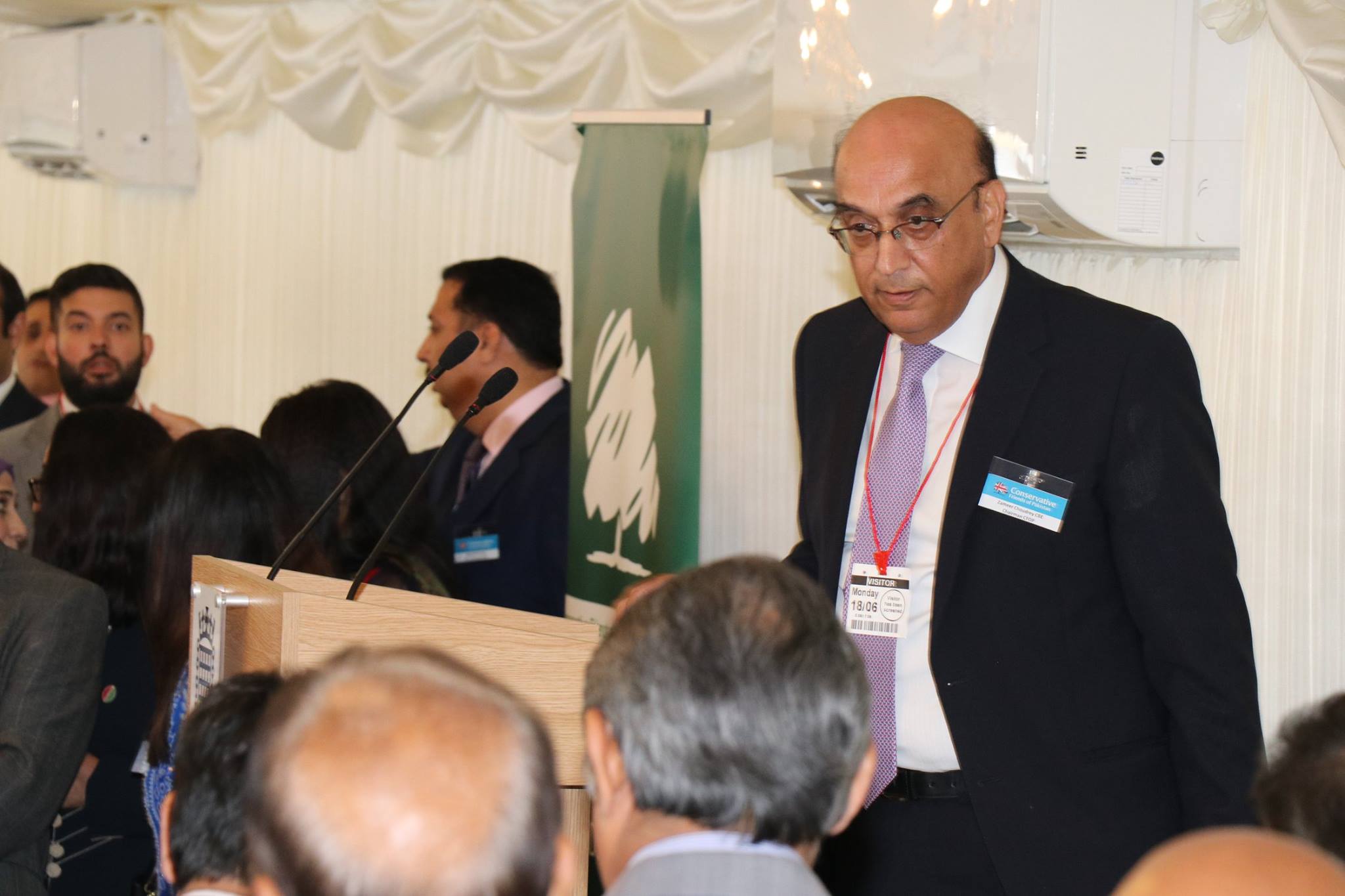 He was followed by host MP and Vice Chairman Communities, Rehman Chishti MP. He spoke about the opportunities in the Conservative Party based on merit, that enable a son of an Imam to rise to a position in the party like himself. He also spoke about the milestone work achieved between UK and Pakistan relations. 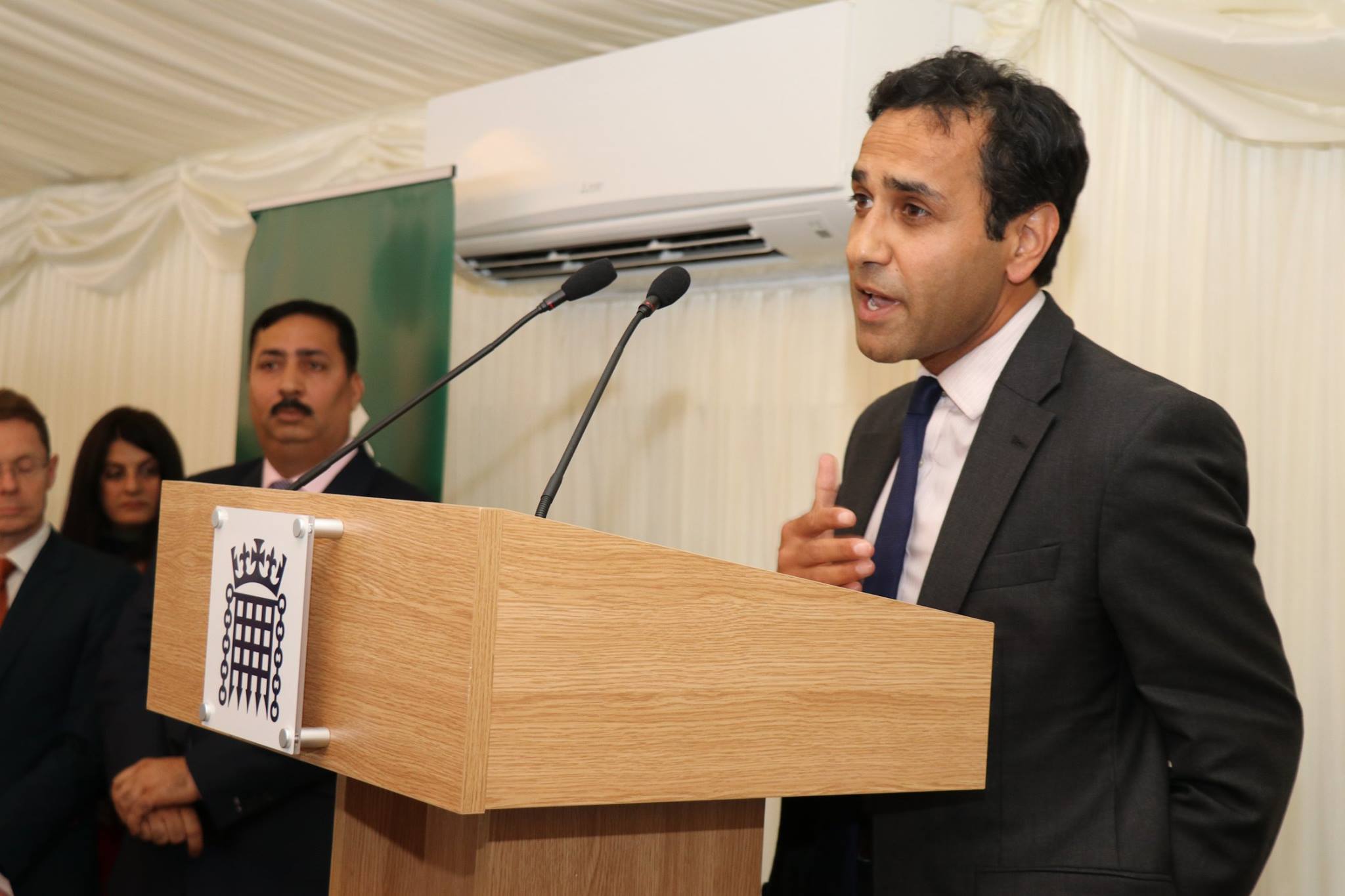 Party Chairman Brandon Lewis thanked the CFOP members and friends for their support in the Local Elections that enabled the Conservative Party to succeed in and hold many Boroughs. He thanked Director Mohammed Afzal for his Campaigning efforts in West Midlands , Vice Chairman SYED Qamar Raza and Director Ahmereen Reza for their Campaigning efforts in London Boroughs. 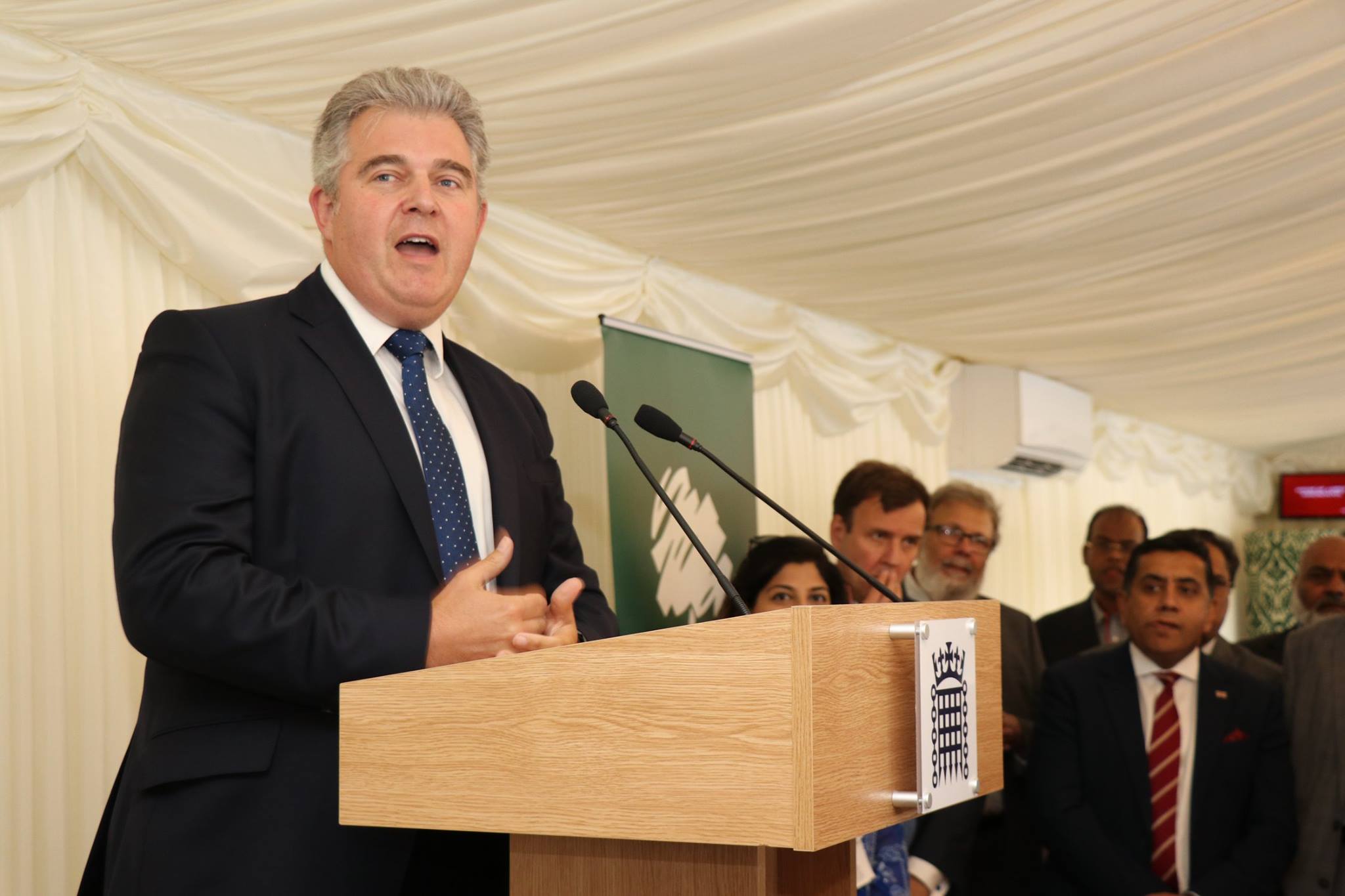 Lord Tariq Ahmed wished the community Eid Mubarak and invited them to join public life and serve the community and the country and continue contributing positively to strengthening Britain. 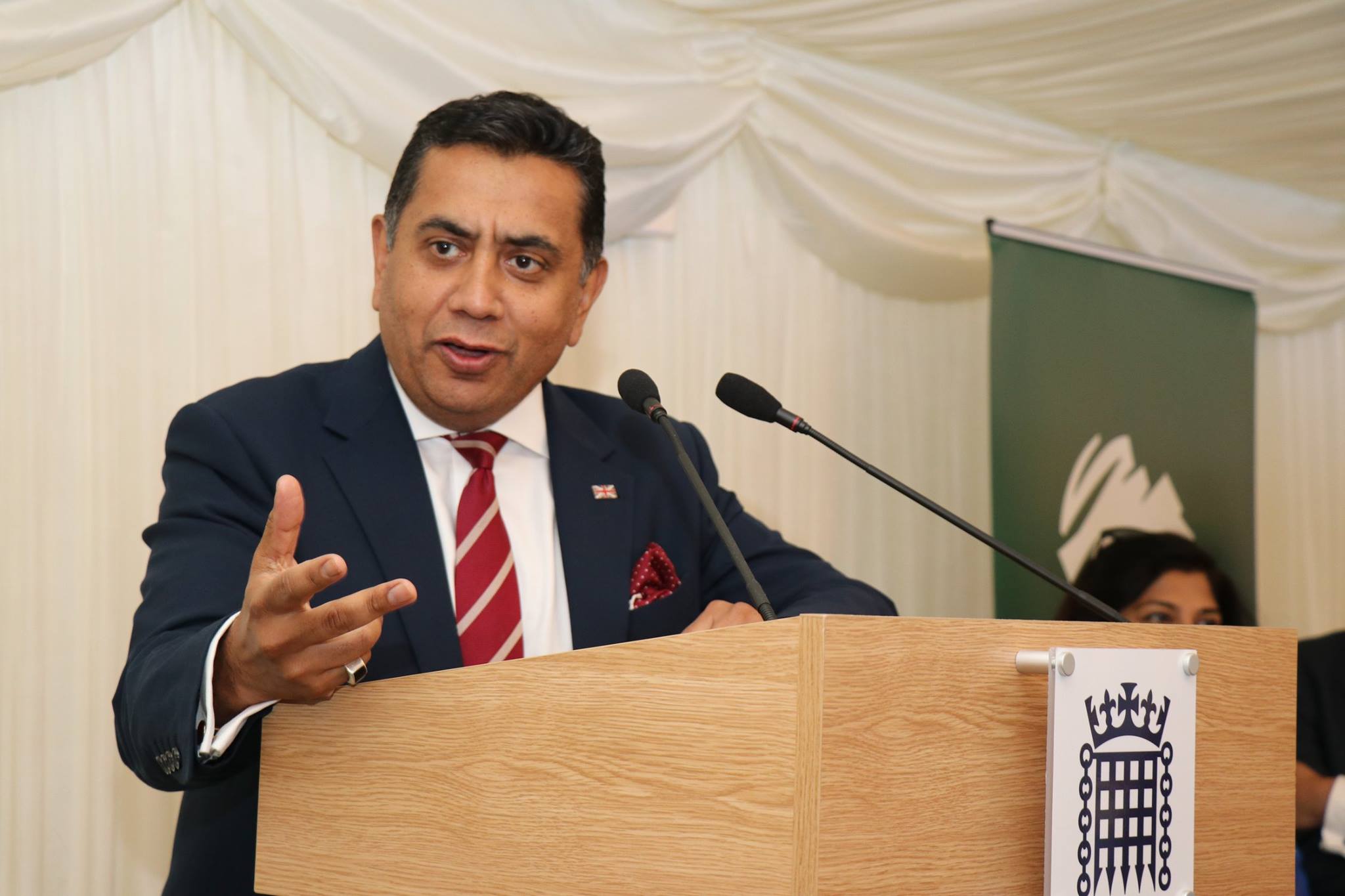 Trade Minister Greg Hands MP, for Chelsea and Fulham, spoke of his visit to Pakistan and the future of trade with Pakistan. He was impressed with the entrepreneurial spirit of Pakistani businessmen and the scale of work being done by UK companies in Pakistan. He invited British Pakistani Businessmen to avail the many opportunities of trading with Pakistan with new subsidies and friendly policies introduced by his government. 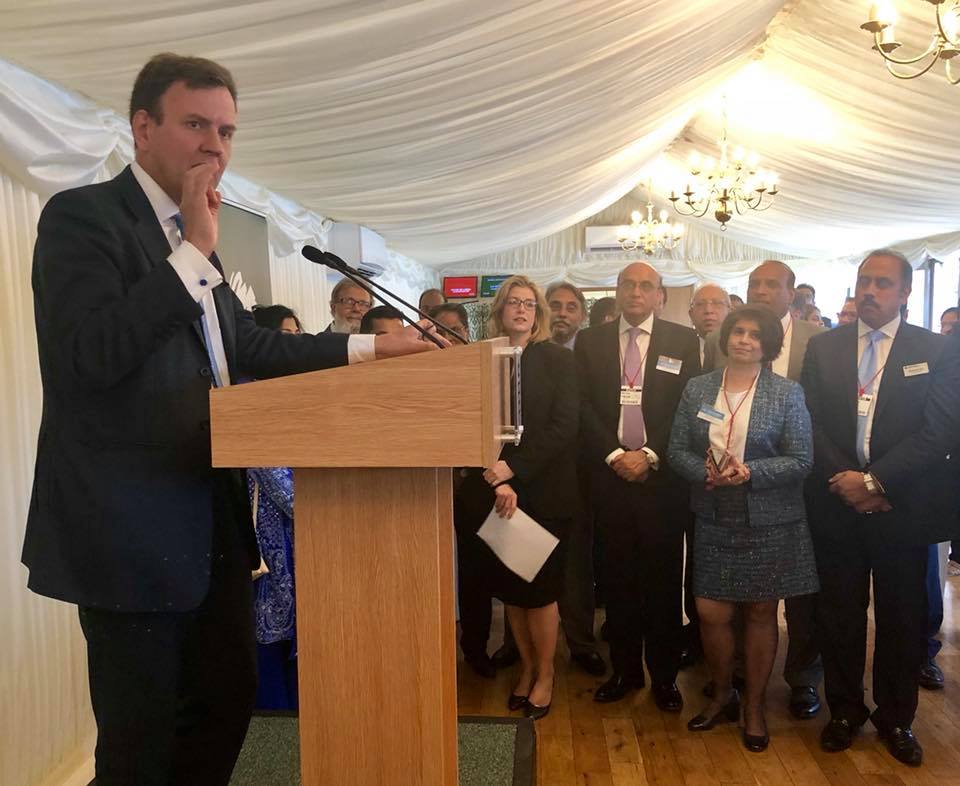 Cabinet Minister for International Development, the Rt Honourable Penny Mordant MP graced the occasion and was pleased to be celebrating Eid with CFOP. She talked about the many projects underway in Pakistan sponsored by DFID. UK takes its role in Pakistan as a Development partner seriously and is working successfully to alleviate poverty and improve the skill base in many parts of Pakistan. 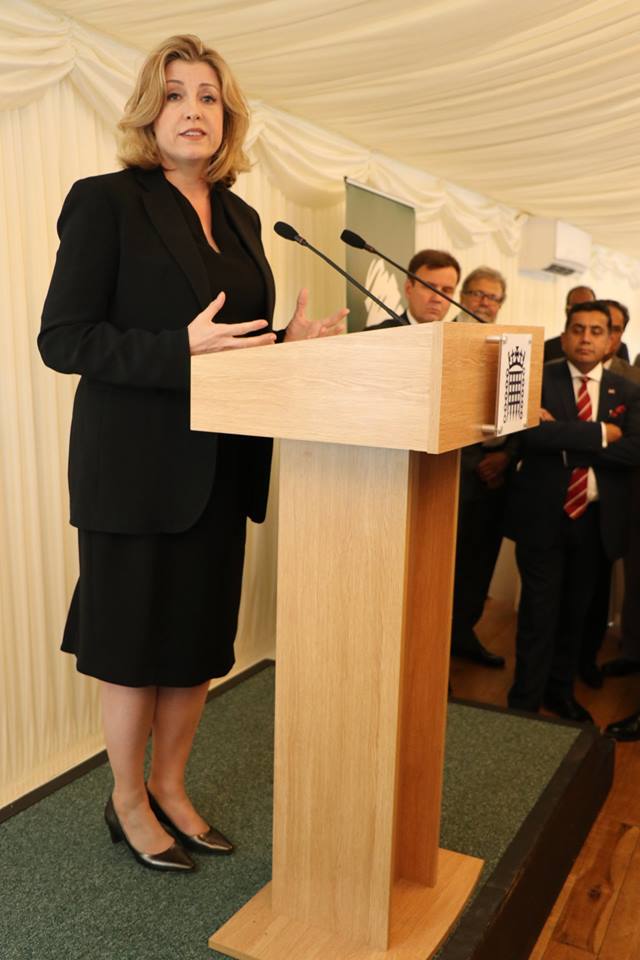 Under Secretary for Transport, Nusrat Ghani MP, the girl from Birmingham, invited British Pakistani Women to come join her on the green benches in Parliament. She would like to see more Muslim women as Conservative MPs. She said it was time we stopped Labour from stereotyping us, and chose Conservatives as the party of aspiration and opportunity. 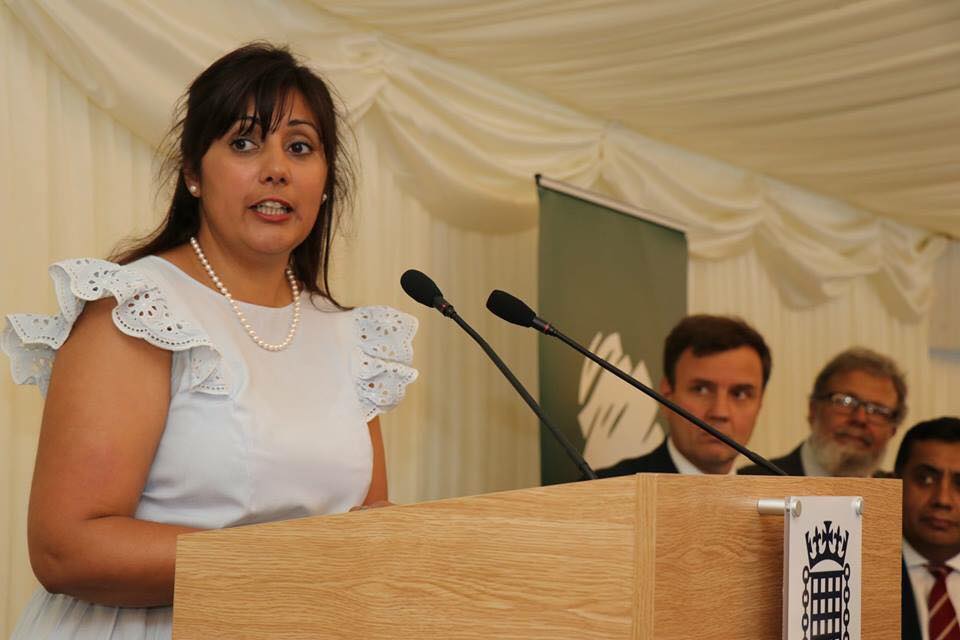 The Eid gathering was graced by the presence of Mayor Andy Street who has worked tirelessly and inspiringly with Communities in the West Midlands. He has galvanised support for the Conservative Party with immense efforts from CFOP and British Pakistanis. He welcomed the new chapter of CFOP Midlands and praised British Pakistanis for their contribution to the community and to the success of the party. 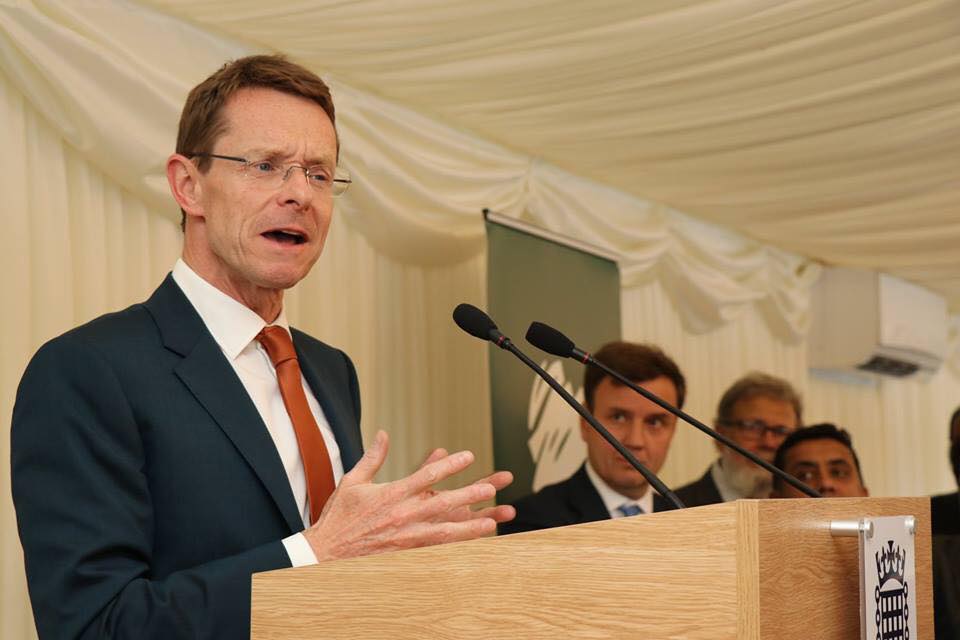 Ian Duncan Smith, MP for Chingford, spoke on a humorous note and said he was neither the son of an Imam like Rehman Chishti MP, nor the son of a bus driver, like The Rt Honourable Sajid Javid MP, seemingly important qualifications for success in Politics.... but he was the first in his family to be born and bred in UK, unlike his ancestors who lived in India and Pakistan. He spoke Urdu fluently and spoke of his special bond with the British Pakistani community. He thanked his supporters and CFOP Campaigners for their dedication and efforts in his Borough. 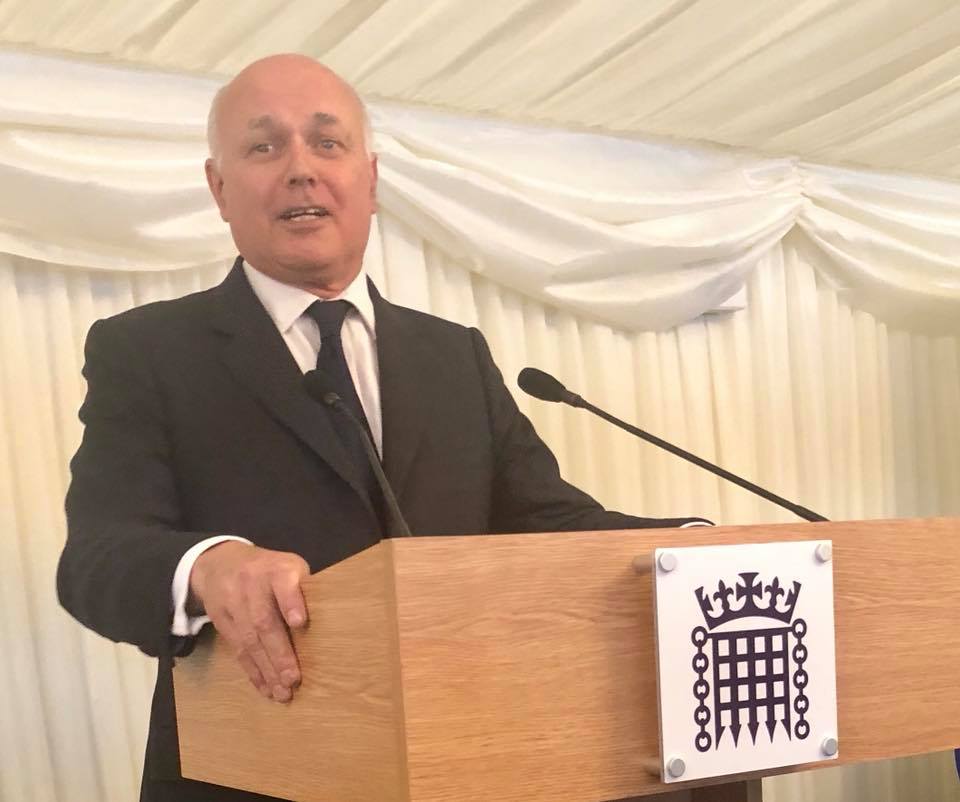 Home Secretary and very popular Cabinet Minister, the Rt Honourable Sajid Javid MP, thanked CFOP and the community for their support and appreciation of the extremely complex nature of his work as Home Secretary. He spoke about the values of Hard Work that he learned from his father and that have instilled in him the work ethic and discipline that is essential for success. 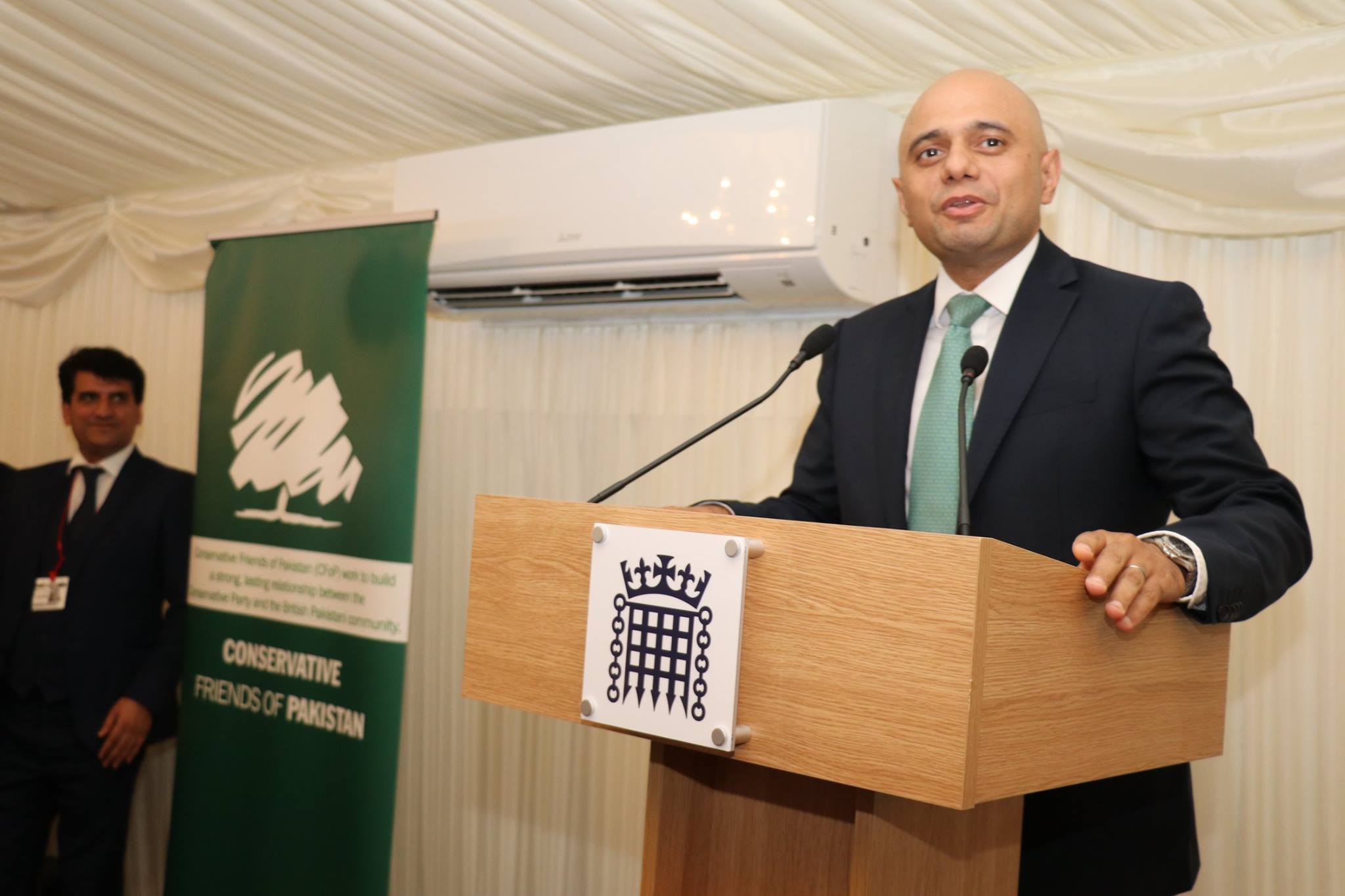 Syed Kamall MEP for West London had a simple yet profound message for the British Pakistanis. If you Believe in yourself, Work Hard and have faith in God, Success is guaranteed. He said it was time that the British Pakistanis and the youth owned up to their role in the community and worked hard for the success of their country, there is no doubt that UK would become a strong economy. He encouraged community members to break free of the misconception that Labour was the party for Asians. The Conservative Party is the party that encourages Diversity, Meritocracy and rewards hard work and dedication. 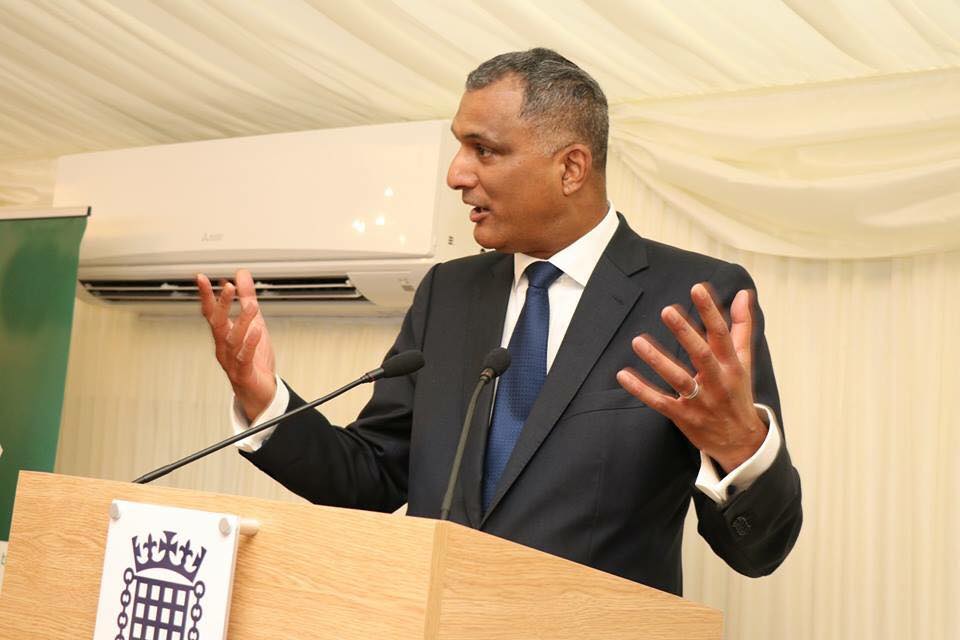 Treasurer CFOP, Director Fazan Tariq delivered the note of thanks and hoped that everyone would continue supporting and participating in CFOP’s efforts to open channels of communication between the Conservative Party and British Pakistani Community. On Behalf of Zameer Choudrey CBE, Vice Chairman Syed Qamar Raza, Political Coordinator Aliya Afzal Khan, Director Mohammed Afzal, Director Ahmereen Reza and the entire CFOP team, he thanked the community members, Peers, Cabinet Ministers, MPs, and key political attendees for making it a memorable Eid al Fitr and a befitting end to a blessed Ramadan 2018. 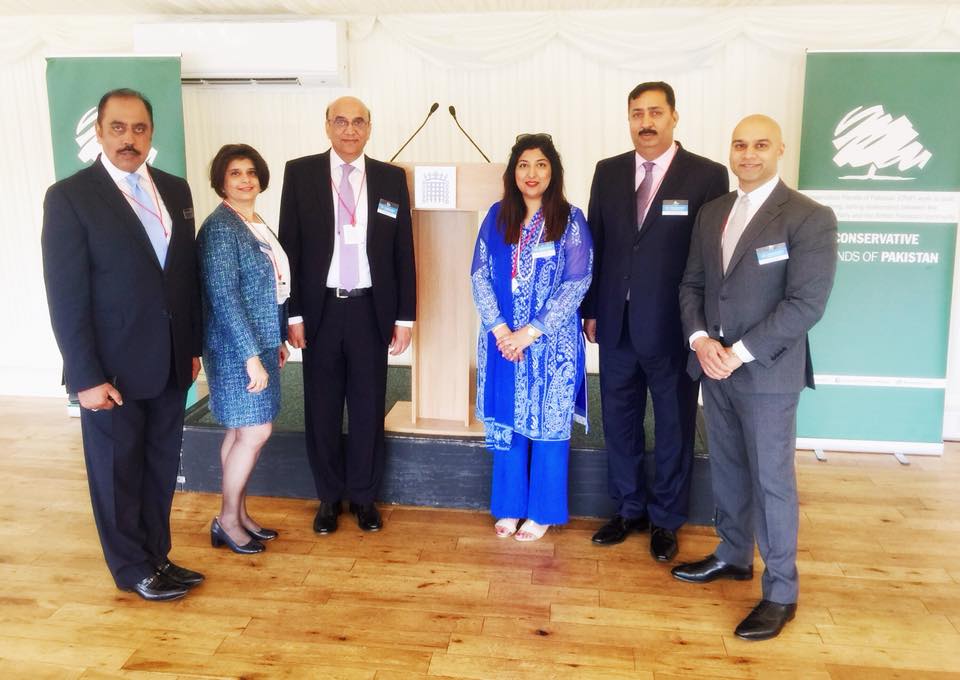 Aliya Khan
Ps. We will upload more photos as they come via official photographers. Please feel free to share your photos of the CFOP Eid Reception 2018 with us on our facebook page https://www.facebook.com/ConservativeFOP/

Some pictures have been uploaded onto our Facebook Album. https://www.facebook.com/pg/ConservativeFOP/photos/?tab=album&album_id=…