British Pakistani Councillor does us proud! 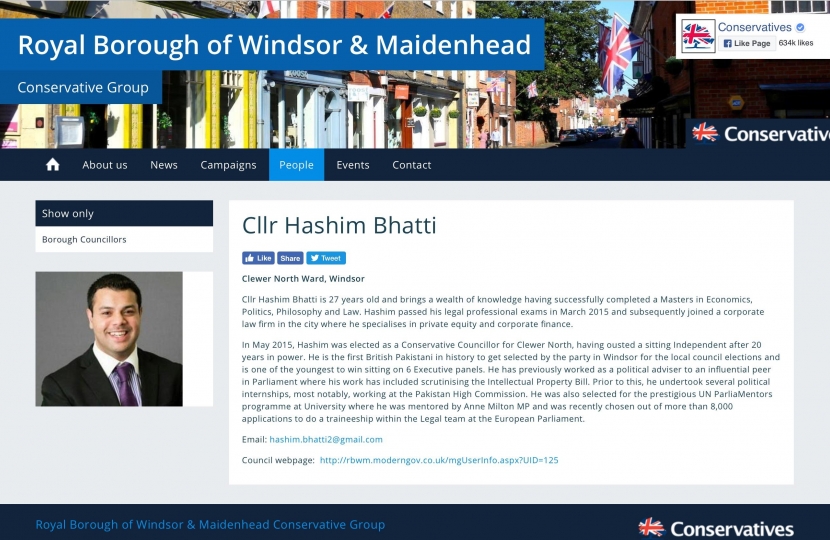 Congratulations to Cllr Hashim Bhatti, Royal Borough of Windsor & Maidenhead, who has been shortlisted for a National Prestigious Award recognising his hard work throughout the year. Cllr Hashim Bhatti is among the final five in the LGiU Young Councillor of the Year award.

In May 2015, Cllr Bhatti was elected as a Conservative councillor for Clewer North. He is the first British Pakistani in history to get selected by the party in Windsor and is one of the youngest to win a seat.

He was previously a parliamentary researcher and has worked at several City law firms specialising in private equity. Cllr Bhatti founded London’s first Interfaith Summit in 2015 which he still participates in and oversees. He is also the chairman of the youth wing of the Conservative Muslim Forum, a Huffington Post blogger and a member of the US Embassy’s flagship Future Young Leaders’ Program.

He has spoken on the impact of Brexit on faith communities, made addresses at the Buddhist Vihara temple on interfaith relations, mentored university students, organised an Eid function in Parliament and was selected by the Organization for Security and Co-operation in Europe to help build a coalition building manual in Austria.

Cllr Bhatti said: “I’m delighted to have a chance of winning this award. It’s a tremendously positive reflection of the hard work of scores of people across a host of organisations.

“It is nice to be recognised in this way but I prefer seeing the differences positive action and working together can make to our community.”

The entire CFOP Team and Pakistani Community is proud of your hard work. Well Done and Best of Luck!!