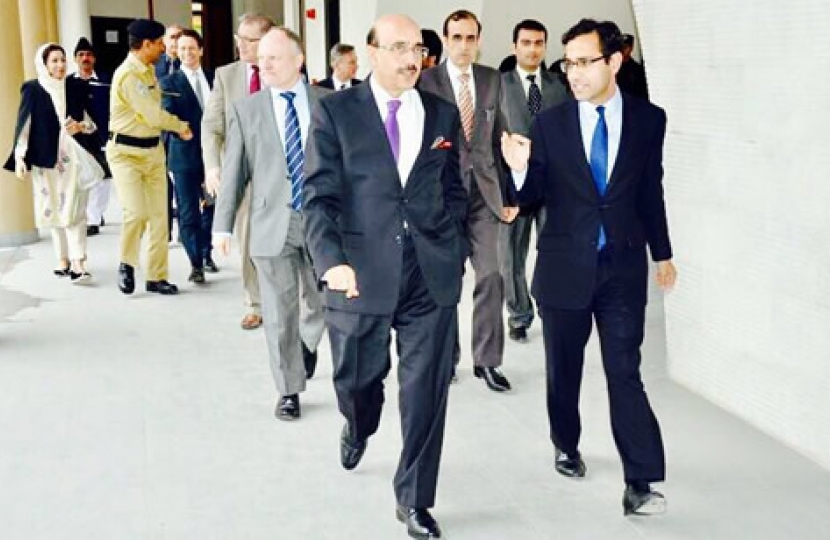 Minister of State and Chairperson BISP MNA Marvi Memon welcomed the British parliamentarians to BISP. She stated that Pak-UK share a long history of cordial relations and it is an honor to receive British parliamentarians at BISP. BISP together with its development partners including DFID is serving the poorest of the poor in Pakistan. BISP is highway to the poor and this platform is open to everyone for use in initiatives aimed at welfare of the poor. The delegates congratulated Chairperson BISP on winning prestigious British Speaker’s Democracy Award for rendering invaluable services for democracy and social change.

The delegates were briefed on the achievements and impact of BISP. Both the sides had a detailed discussion on scope and operations of BISP. Rehman Chishti MP appreciated the magnanimous approach taken by the incumbent government to continue the programme initiated by the previous government. He added that societies are judged by the way they care for its poor. BISP is a commendable programme for the welfare of the poor and DFID is proud to support the most vulnerable and marginalized people of Pakistan.

In response to Henry Smith MP’s query regarding possible increase of number of beneficiaries after completion of new survey and census, Chairperson BISP stated that poverty calculations would be made in August after receiving results of pilot phase of NSER. As security situation has improved, this ongoing survey would register each and every household, cover all far flung areas and no one would be left out.

Nigel Huddleson MP said that UK parliamentarians take keen interest in BISP and it is good to see UKaid being used for the most deserving and downtrodden. Chairperson BISP added that DFID is supporting Pakistan for the last five years and this support would continue till 2020.  DFID’s support in Waseela-e-Taleem and National Socio-Economic Registry (NSER) is very important for the success of the premier social safety net.

Mark Pawsey MP expressed his interest in knowing the rationale behind giving BISP stipend to female head of family. The delegation was informed that selection of female heads for financial assistance by BISP has brought them on the forefront, raised status of women manifold, given them democratic & political rights and resulted in improved nutritive status of children.  Nigel Huddleson seconded the reason that women are chosen for the assistance because they spend the stipend on their children and food primarily.

In response to Rayston Smith MP’s query on political ownership of BISP by different political parties, Ms Memon stated that there is no disagreement on BISP as every political party acknowledges BISP’s contribution to the welfare of the poor.

The British delegates interacted with the BISP beneficiaries. The beneficiaries appreciated the role, BISP has played in bringing betterment in their lives. The success story of Sumaira Bibi from Rawalpindi who was present on the occasion was narrated to the delegates. Chairperson BISP apprised the delegates that BISP has compiled real stories of beneficiaries from all across the country in native language, Urdu and English. The book would soon be available online, in print and in audio. One story per district has been chosen for the book but we have as many as 5.4 million stories that depict the resilience of Pakistani women and the impact BISP has made in their lives.

The British MPs thanked BISP for the warm welcome and hospitality.  Rehman Chishti said that the delegation had very high profile meetings in the last couple of days but it was refreshing to visit a department like BISP that is working for the poor.

Later, the Chairperson BISP held a meeting with representatives of World Bank, Oxfam, Aurat Foundation, Rural Support Programme Network, Community Uplift Program and Nestle. During the meeting, these organizations acknowledged the role of BISP initiatives in financial and social uplift of the beneficiaries. They appreciated the platform of BISP Beneficiary Committees (BBCs) and showed interest in using them for the dissemination of messages to the grass root level.