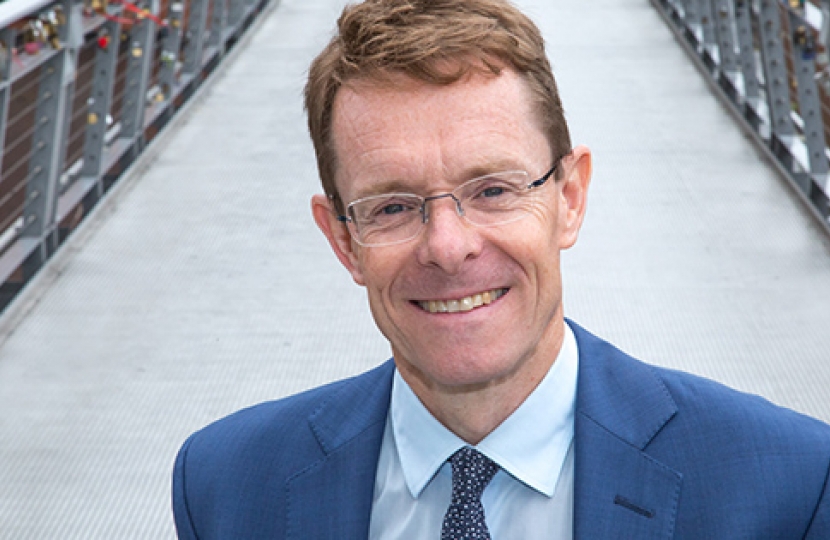 A proud Brummie, Andy Street has combined a career with John Lewis, Britain’s most successful workers’ co-operative, with a host of high-profile economic development roles, working with local and national government.

Starting on the John Lewis graduate scheme, he rose through the ranks to become Managing Director, overseeing one of the most successful periods in the company’s history.

He has been the Chair of the Greater Birmingham & Solihull Local Enterprise Partnership since 2011, helping to build the relationships that have underpinned the economic growth of the region.

Additionally, he has been lead non-executive director for the Department for Communities and Local Government as well as a member of the Prime Minister’s Business Advisory Group.

Born in Banbury, Oxfordshire, in June 1963, Andy’s family moved back to the West Midlands before he was one, and he lived in Northfield and Solihull until going to University aged 18.

Andy studied Politics, Philosophy and Economics at Keble College, Oxford. In 1984, he became president of the University Conservative Association, following in the footsteps of Margaret Thatcher, William Hague and many more.

Although his ambition had been to become a social worker, he started his career at the John Lewis Partnership in 1985 as a trainee at Brent Cross, having been famously turned down for the Marks & Spencer training scheme.

After roles in department stores, head office and manufacturing units, Andy became Managing Director of John Lewis Milton Keynes in 1993, moving to the same role at Bluewater five years later, before becoming Supply Chain Director in 2000 and Director of Personnel in 2002.

He became Managing Director in 2007 and, during his tenure at the top, oversaw a 50% increase in gross sales to over £4.4bn, a doubling in the number of stores and the growth of the company’s online business.

While still at school, he became involved in a charity called Birmingham Young Volunteers (BYV) Adventure Camps and, for 22 years, he led camping holidays for underprivileged youngsters from the city.

In May 2011, Andy Street was appointed Chair of the Greater Birmingham & Solihull Local Enterprise Partnership.

During his time as Chair, the GBSLEP negotiated a Growth Deal with Government worth £379m to help fund projects and schemes to drive economic growth. The GBSLEP has also implemented the City Centre Enterprise Zone which has seen work start at a number of key sites, including the redevelopment of Paradise and the construction of Arena Central, to be the new UK HQ of HSBC.

It was during this time that neighbouring local enterprise partnerships and local authorities agreed to unite under the auspices of the West Midlands Combined Authority, a history-making agreement which meant, for the first time, the West Midlands was volunteering to work together on economic development.

Between 2010 and 2015, Andy was a member of the Prime Minister’s Business Advisory Group. In January 2016, he joined the Department for Communities and Local Government’s board as the lead non-executive director. The Board’s role is to oversee the implementation of policy.

Outside of work, he is passionate about the arts, particularly in the West Midlands. He is Vice Chairman of Performances Birmingham Limited, which is responsible for running the City’s Symphony and Town Halls.

In June 2015, Andy Street was awarded the CBE for services to the national economy. He was named the ‘Most Admired Leader’ of the year by business magazine, Management Today in 2014. He received the ‘President’s award’ from the Greater Birmingham Chambers of Commerce in for his work in the region. He holds three honorary degrees, from Birmingham City University, Aston University and the University of Birmingham.