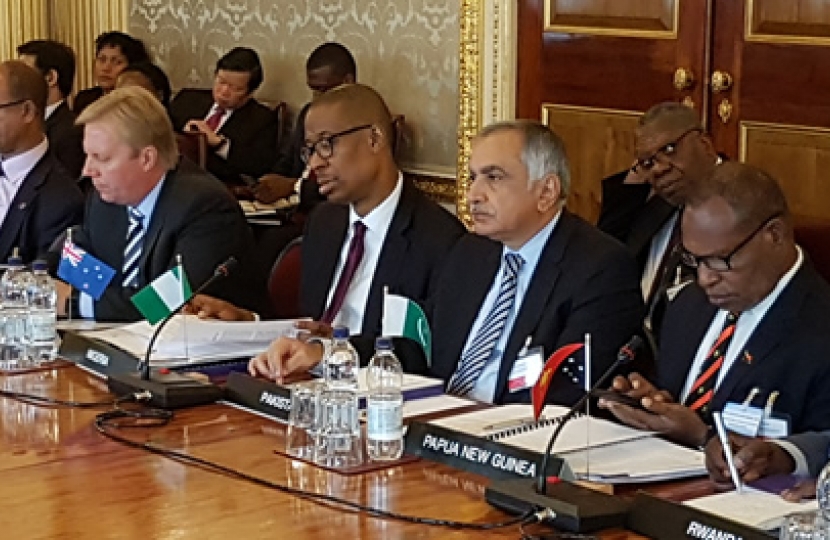 H.E. Syed Ibne Abbas, Pakistan High Commissioner to the UK also attend the Conference on the invitation of the Commonwealth.

Led by Secretary Commerce, the Pakistani delegation attended two roundtable discussions. One was on “Financial Services” whereas the other was on “Creating an Export Economy”. The Pakistan delegation actively participated in the discussions and shared their experiences with other delegates. First day segment of the Conference was organized by Commonwealth Enterprise and Investment Council (CWEIC), at Lancaster House London.

On the sidelines of the event, a meeting between Commerce Secretary and Australian Trade Minister Mr. Steve Ciobo took place. On this occasion, various avenues of cooperation between the two countries were came under discussion.

On this occasion an MOU was signed between FPCCI and CWEIC for better collaboration between the two platforms.

The 2nd session of Commonwealth Trade Ministers Conference took place at Marlborough House London. Commonwealth Secretary General Ms. Patricia Scotland, on the occasion, stated that empirical evidence suggests that Commonwealth countries could reap 19% more advantage if they trade amongst themselves on account of common language and system. She emphasized on the member countries to take advantage of this opportunity.

Another important agenda item discussed was “Leveraging opportunities and addressing challenges to Intra Commonwealth Trade and Investment”. Secretary Commerce on this occasion highlighted the disruption which the technology is bringing about in the way businesses are doing cross border transactions. He further informed that during a WTO Ministerial meeting in Nairobi, Pakistan had proposed a group on E-Commerce which has now been joined by 13 Countries. He proposed E-Commerce to be included in the agenda for CHOGM 2018.

Earlier, Minister Anusha Rahman and the Secretary Commerce met British Minister of State for Digital and Culture and discussed collaboration in IT and Telecom sectors.

During the visit, Secretary Commerce together with Minister of State for IT and Telecom and H.E. Syed Ibne Abbas, Pakistan High Commissioner to the UK met with Mr Muhammad Nasir, CEO Inbox and Mr. Chris Sandford, Regional Director Wurld Tech. The meeting focused on ways and means of collaboration between public and private sectors to carry out the fast digitalization agenda of the current government.