Female journalism to be given greater role in Pakistan 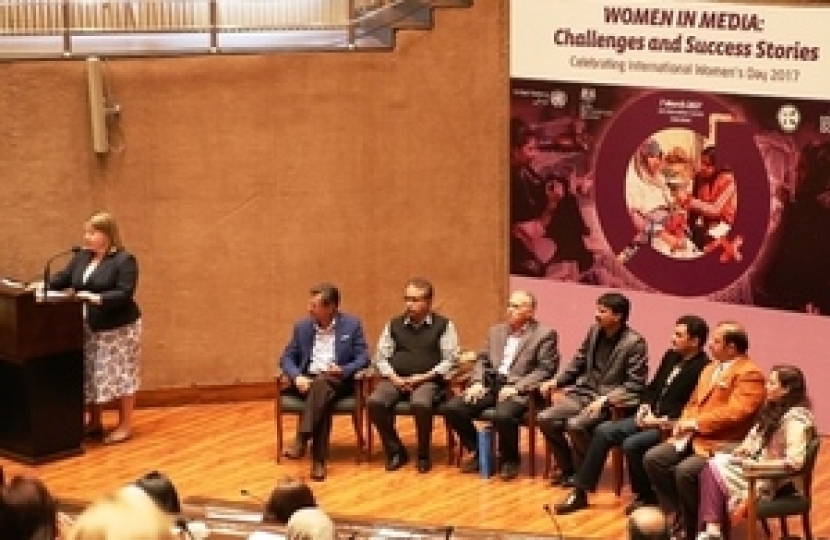 Press clubs across Pakistan have committed to supporting women in journalism, at a United Nations Information Centre event to mark International Women’s Day supported by the British High Commission and the National Press Club.

Speaking at the event, the Director of the UN Information Centre, Vittorio Cammarota said:

We are committed to promoting and facilitating the empowerment of female Pakistani journalists and I am very proud to announce today the establishment of a working group for women from the media industry. It will be hosted by the UN Information Centre and will provide a platform for exchange, dialogue, learning, advocacy and support. We’ll work in partnership with the press clubs, with the federal and provincial government stakeholders and with member states.

We will also seek the contribution of the many well experienced men working in the media industry: it’s very important to stress that the advancement of women’s rights cannot happen without the full engagement of all of us.

I am grateful to the British High Commission and the National Press Club for their strong commitment in making this event happen: only by joining hands we can effectively contribute to the full empowerment of female journalists in Pakistan.

Samuel Heath, the Head of Communications at the British High Commission, said:

There are few more important professions than journalism. Journalists hold politicians, business leaders and even diplomats to account, and they hold a mirror back to society. Any women in journalism that are harassed in their work, or discriminated against, or don’t have their work recognised, is a waste of talent and a poor reflection on the profession of journalism. I am delighted that press clubs have committed to working with women journalists to tackle discrimination and harassment, and to bring real gender equality to journalism.

Our support for this excellent UN initiative is just a very small element of the work the UK is doing for gender equality. Whether building classrooms in girls’ schools, improving maternal health or providing stipends to keep older girls in school longer, the UK is committed to supporting women and girls in Pakistan.

The event marked International Women’s Day which is a worldwide celebration of progress made towards achieving gender equality and women’s empowerment. It was organised by the British High Commission, the UN Information Centre and the National Press Club. The event was also attended by diplomats, government officials and civil society.